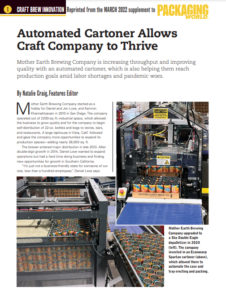 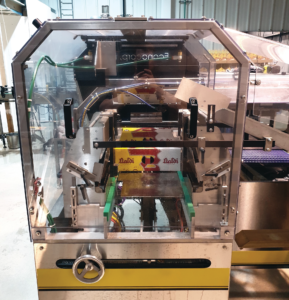 When Bruggsmiðjan Kaldi Brewery was launched in 2006 in the small town of Árskógssandur in the north of Iceland, glass bottles were of course the format.

But it seems that consumers in Iceland are just as mad about beer in cans as everyone else in the world. So last year the craft brewer installed a canning line—right about the time that the pandemic was rearing its ugly head.

“The machines were due into our plant in March, along with technicians from suppliers to get things up and running,” says Brewmaster Siggi Ólafsson. “We wound up doing most of the installation and commissioning ourselves, and we were only delayed about a month. By June of 2020 we were in production.”

The equipment in the line comes from numerous parts of the world, including the U.S.-made end-of-line Econocorp E-2000 cartoning machine. “We were led to Econocorp during conversations we had with other machine suppliers who are familiar with the kind of machinery that’s suitable for craft brewers,” says Ólafsson. “It’s just the right size machine for our production, and it’s very simple in design and, subsequently, in operation.”

END_OF_DOCUMENT_TOKEN_TO_BE_REPLACED

There are a lot of different industries that can benefit from tray formers and sealers. Some of these industries use other methods of packaging, as well. But for these companies, some trays are produced for shipment and distribution. Here are three of the industries that are most likely to benefit…

Continue ReadingThree Industries That Can Benefit from Tray Formers and Sealers

It’s a startling statistic, but only six percent of new product launches still remain on the shelf after two years. That’s after spending at least $1 million dollars and roughly two years developing the product. The world of retail can be harsh, to say the least, and a product’s packaging…